Leading up to the Season 2015-16, The Blues needed to add additional players with lots of legwork and discussion 2 players were found. 1 new striker was reactivated after taking a break for a season. The other All-Rounder transferred from neighbor FC Hochstadt, his last game was in the D-Jugend. Notably it is very difficult to find players in the 15-16 year old age group, Kudos on the Youth Coordinator, Coaches and players on finding these 2 new additions. 3 Players departed 2 Strikers and a Defender, all 3 departing with the same destination of Germania Dörnigheim. With a total of 16 goals shot in league play last season by the 2 Strikers what they bring to the game will be missed. As for the Defender the last half of the last season was spent on the
bench due to long term injuries, staying healthy will be Key this season if he wants to make it with his new team.

On the Coaching side, one change occurred with Marcel Smiroldo taking over for Michael Fink. Coach Smiroldo has played 4 years as a 6er / defending midfielder on the KeWa Senior Team and
looks forward to working with The Blues. Due to Job changes Coach Fink had to step down from his Honorary Coaching position, we hope to see him on Game Day supporting his Team.

We welcome the new players and wish the departing players lots of luck – Go Blues!!!! 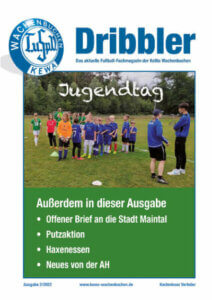